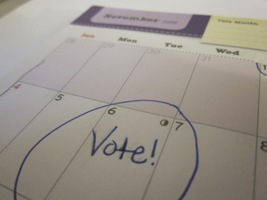 On November 6th, and the days leading up to it, millions of Americans streamed into their polling places and bubbled in scantrons, pressed electronic buttons, or pulled down levers signifying their choice in a huge number of races, from the presidential contest to local referendums. They were a diverse coalition: of 117 million voters, thirteen percent were black, ten percent were Latino, and five percent were of other races. Nineteen percent were between eighteen and twenty-nine years of age. Fifty-three percent were women. Considering what American elections look liked in the beginning, in the time of the founders, these figures tell the tale of the progress that has been made, through fits and starts, in this country over the past two hundred years.

However, there is still one group that does not have a say in American elections, despite the fact that the governing decisions made by elected officials effect them just as much as anyone else. There is still one group that is disenfranchised, despite the fact that the United States has vowed to stop such policies. Who are these people? Americans under the age of eighteen.

When the issue of lowering the voting age comes up, opponents often argue that younger Americans lack the capability to make the serious choices involved in elections. That view is misguided and a bit condescending. There are many young adults who are just as politically informed as their older relatives and capable of making rational decisions based on their personal beliefs. Most people would agree that a sixteen year old is hardly less rational that her eighteen year old counterpart. The sixteen year old is allowed to drive a car and, in Maryland, can be treated as an adult if accused of a crime. So, why can’t she express her political opinions?

There are many ways that the issue of youth voting could be addressed. Ryan Bruce (’13), is a politics lover and future Government major who was seventeen at the time of the election. He supports a lowered voting age, stating, “I think it should be lowered with stipulations. If you are under eighteen, you should have to take a test to show that you’re an informed voter. If you cannot pass the test, you cannot vote.”

This idea would please those who fear that the majority of youth are ill-equipped to make political decisions, but could turn into an unnecessary burden if the tests are designed to suppress the youth vote, as literacy tests were used to suppress African-American turnout after the Civil War. Additionally, if all 117 million voters in the U.S. were asked to prove that they knew what they were talking about politically, national elections would become much smaller affairs.

In my mind, the best solution is an across the board decrease in the voting age to sixteen years old. At this age, youth have begun the second half of high school and are expected by many, including teachers, to display personal responsibility.

Some of the most contested issues in this election applied directly to the lives of Americans under eighteen. There was the Dream Act, which will give some of their peers easier access to education and Question Six, which will allow them to marry how they see fit. Nationally, the occupant of the White House appoints a Secretary of Education and sways many educational decisions, from encouraging reform through Race to the Top to changing the nature of college loans. Young Americans should be able to vote on these issues. Their futures are at stake.