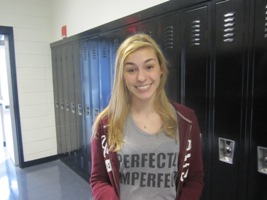 There are several levels of accomplishment that North Point’s sopranos, altos, basses, and tenors can aspire to. Many students participate in All County Choir, fewer sing with the Tri-County Choir, and a select elite participate in Maryland’s All State Choir. Olivia Johnson (’14) has done all of the above and recently checked off an even more prestigious accomplishment: singing in the All Eastern Choir. This group is composed of students from up and down the east coast of the United States who succeeded in two or more All State Choir auditions in their home state. Johnson was the first North Point student to ever participate in All Eastern.

Given her background, it isn’t surprising that Johnson’s pipes have taken her this far. She has been singing in ensembles for years, beginning with the Port Tobacco Players Encore Kids when she was six years old. She has sung in a church choir and various school groups, including North Point’s Eagles in Harmony and Chamber Choir. Johnson has participated in All County and Tri County for her three years at North Point. Last year, she snagged the distinction of being the top soprano in Charles, Calvert, and St. Mary’s Counties.

“She’s sensitive to our sound and she can hear what we need and how to fix it,” said Jessica Kirkham (’13), a fellow member of North Point Chamber Choir, which is the ensemble with the highest skill level. All members must audition for a spot in Chamber.

The audition process for All Eastern was unsurprisingly intense. “You have to be in the top three percent of the All State ensemble you were in,” said Johnson. Then, there was an application with endorsements from the principal and a teacher, plus a choral resume. “The window to accomplish this feat is also extremely difficult because it has to be done either as a sophomore or a junior,” said Ms. Helming, the Choir instructor.

“The concert was incredible,” Johnson added. The group assembled in Connecticut for this year’s show earlier in April. Johnson sang with the 150 voice Treble Choir, All Eastern’s first ever all woman group. The songs were challenging and came in five different languages: English, Latin, Spanish, Basque, and Swahili. All of them were memorized and the singers were taught the translations and proper pronunciation. Two other mixed choirs of 350 singers rounded out the All Eastern program.

Overall, three hundred students from Maine to Maryland participated. “There were so many people from so many different states,” Johnson commented. Six percent of the singers were Marylanders.

“Olivia is one of our strongest singers in Chamber Choir,” said Kirkham. “She has a natural ability to lead and direct others.” Helming echoed that sentiment, stating, “Not only does Olivia possess a raw natural born singing talent, she has the passion and the drive to work to push herself to achieve a very high level of musicianship.”

After hitting All Eastern, there is still one frontier remaining for Johnson to explore: the All National Honor Ensemble, which is comprised of students from across the United States. That group will perform this fall in Tennessee. “If that happens, that would be amazing,” said Johnson.