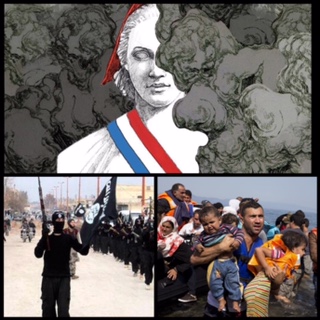 After the devastating terrorist attacks in Paris, millions of people remain eager for a specific solution to the crisis that is the Islamic State (ISIL). With the attacks occurring on 11/13/15, world leaders met just hours after the carnage. Shifting their attention to the growing dangers ISIL presents amongst the entire world, foreign leaders from 19 countries, including the U.S., Russia, and Iran, all agreed to unite against terrorism. According to CNN, U.S. Secretary of State John Kerry and his counterpart—The Russian Foreign Minister, Sergei Lavrov, both condemned the attacks and ISIL as a whole. “We are witnessing a kind of medieval and modern fascism at the same time, which has no regard for life, which seeks to destroy and create chaos and disorder and fear. And the one thing we can say to those people is that what they do in this is stiffen our resolve, all of us, to fight back and to hold people accountable and to stand up for rule of law, which is exactly what we are here to do,” explained US Secretary of State, John Kerry. Similarly, Lavrov stated, “We have to strongly reiterate that there would be no tolerance of terrorists. And just like there is no justification for terrorist attacks, which is the position of the Security Council, I believe as John said, there could be no justification for us not doing much more to defeat ISIL, al Nusra, and the like.”
However, despite the general agreement between all of the nations, no specific solution was reached. According to Aljazeera.com, there is still no word on any of the Syrian opposition forces meeting with the Syrian Government (under President Bashar al-Assad). Unfortunately, the tense relationship between the two parties still remains unresolved, and additionally, could prove even more troublesome for the U.S.-Russian coalition because of the Russian-Syrian alliance. However, what is clear is that 250,000 people have been killed due to the ongoing crisis in Syria. Additionally, millions of people have been forced to flee their homes in order to escape the violence. If no action is taken to resolve this ravaging conflict, implications could further exacerbate, further bleeding into the west—like the attacks on Paris yielded, or worse.