The Get Down: New York Street Style 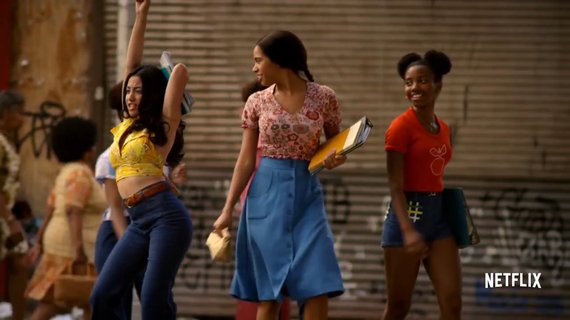 The news of the new 13-episode Netflix miniseries, “The Get Down,” has spread like wild-fire. The talk is mainly because of the all-black cast and aesthetics of the show. “I have heard of the show from a magazine and it seems pretty cool. Hip Hop is important to music now and a lot of teenagers listen to it. It would be cool to hear about the origins of Hip Hop,” Jordin Dixon (17’).

Baz Luhrmann, the producer and director of “Romeo + Juliet,” “Moulin Rouge,” “The Great Gatsby,” and more, has dedicated a whole year to perfecting this series. This musical drama took Baz Luhrmann and his wife, costume designer Catherine Martin, 10 years of developing the screenplay, costumes, and casting. “In 1977, disco was reigning and soaring,” Luhrmann told Vogue. “Rock was really decadent. You’ve got Son of Sam, terrorism, an oil crisis, crazy cults. Elvis dies… And in this year, in an outer borough, kids are doing this stuff that no one cares about. . . How, with so little, did this singular creative gesture that would go on to change the world get born?”

“The Get Down” is about the birth of hip-hop and disco in the 70’s as it developed in underground clubs and on the graffitied streets of the Bronx. Not only was the 70’s the birth of a new generation but it was also “the decade that fashion forgot.” People of this generation, would look at 70’s fashion and turn away in an instant, but they forget to realize that 70’s fashion was the start of a new age. Some trends we have now would not be trending if it wasn’t for the 70’s. Crop tops emerged in the late 70’s. You would have been looked down upon wearing a crop top in the decades before the 70’s, but in today’s society it is embraced.

The cast of young millennials that were said to fit the script transformed into 70’s teens. The lead role, Books, a poet turned rapper, is played by Justice Smith. Alongside Books is his love interest Mylene Cruz, a pastor’s daughter played by, a new face, actress Herizen Guardiola. Book’s crew consist of Shaolin Fantastic played by Shameik Moore who was known for his lead role in independent movie “Dope.” Marcus ‘Dizzee’ Kipling, is played by child-star Jaden Smith, Ra-Ra, is played by Skylan Brooks and Boo-Boo is played by rookie actor Tremaine Brown Jr.

Audiences look forward to watching “The Get Down,” said to be released this coming August. Baz Luhrmann’s motion pictures are so original that a movie fanatic can easily spot one of his works. His growing list of magnificent productions always leaves people speechless. His use of vibrant colors, decadal costumes, memorable soundtracks, and breathtaking cinematography seem to be a common theme to his motion pictures.