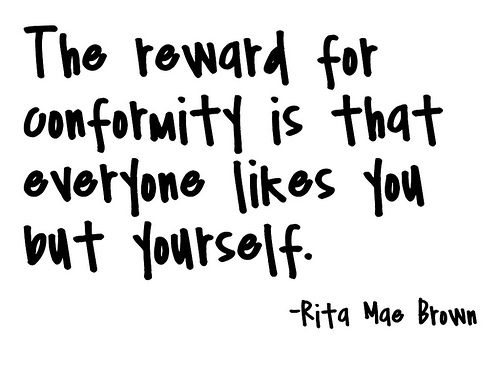 In Sociology, we learned about conformity, which is basically the concept where individuals, either consciously or unconsciously, adapt the ideas, beliefs and/or behaviors of the bigger group.

In high school, and in the public education system in general, it seems that there is a pressure to be (for lack of a better term) mainstream: to like the same things other people like, to listen to the same songs as other people do, to adopt the same mentality, etc. Along with this pressure comes the fear of being judged for sticking out from the crowd, which is a rational fear. This results in the suppression of the expression of the individual and of unique and different perspectives, which ultimately then leads to a decreased rate of growth and progress for both the individual and group.

Psychologist Solomon Asch conducted an experiment that involved test subjects and a group of other people (the controlled group in the experiment.) Once the subject is brought into the room, a chart with four different lines are presented to them, and they are asked which line out of the later three matches the first line. After conducting the test many times and with different subjects, Solomon Asch found that the subject would more likely say the same answer the group of people answered before them would say, even if the answer is clearly and obviously incorrect. However, if one person from the controlled group said an answer that contradicted the group’s answer – though still incorrect – the subject would be more motivated to speak out and answer the correct answer.

A takeaway from this is we shouldn’t give into the pressure of fitting into the crowd, especially and most importantly if it forces us to give up our personal preferences, values and beliefs. Does that mean that one should always stand out and be different? Of course not. The human species are social creatures, and it would be impossible to go about life totally and isolated and unique to the people around us. It’s the conformity that goes against who we are as individuals and challenges our core beliefs. A good way to think about it: more than likely there is someone else who is just waiting for somebody else to stand out to be inspired to do so themselves. Be the one that inspires in the face of fear.